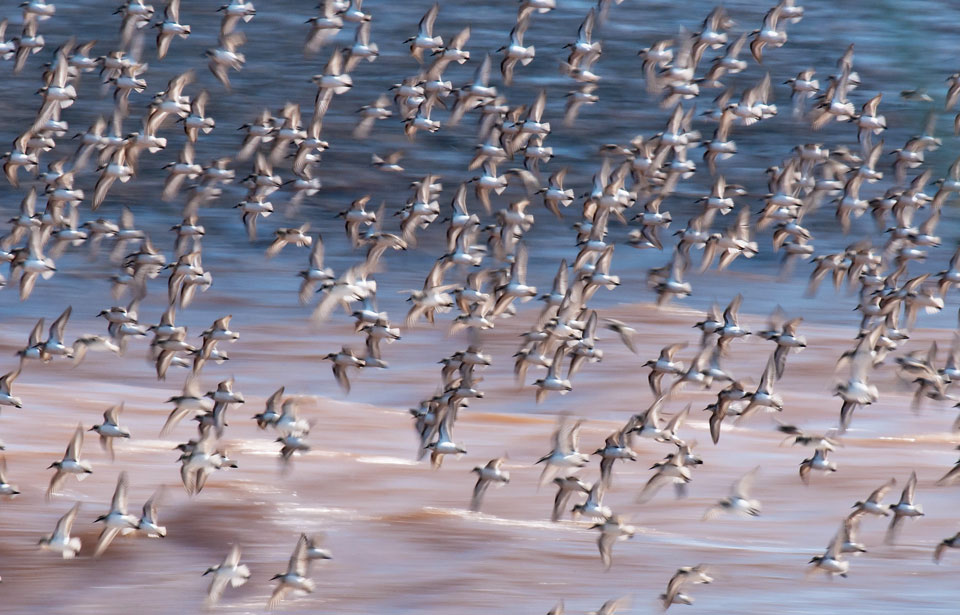 The Semipalmated Sandpiper Calidris pusilla, only about 30 g in weight and 14 cm long, is one of Canada’s smallest shorebirds. Its name comes from the partial webs between its toes. Males and females are identical in rather plain brown or grey plumage although females are slightly larger. The species can be difficult to distinguish from other small sandpipers.

Some juveniles do not replace any flight feathers in their first winter, as these are quite new. Others, however, moult some of the outermost primaries (outer wing feathers), which are important for flight and wear most rapidly.

The Semipalmated Sandpiper’s voice is a single note chit or cheh.

Semipalmated Sandpipers are by far the most common sandpiper in central and eastern Canada, particularly in late summer. Flocks of more than 200 000 birds have been recorded in the Bay of Fundy during fall migration. Large flocks of sandpipers are a spectacular sight as they change direction together during flight, looking much like an aerial school of fish.

Scientists are interested in finding out how these small birds migrate such long distances and how they navigate between wintering and breeding sites.

Semipalmated Sandpiper chicks are not fed by their parents. They hatch with open eyes and almost adult-sized legs, and as soon as they are dry, they stumble about, pecking for insects. Semipalmated Sandpipers spend the Canadian winter in northern South America, primarily in Suriname and French Guiana. Some (mostly western arctic breeders) are found along the Pacific coast of Central America and northwestern South America. Smaller numbers spend this season in the Caribbean, and fewer still in southern Florida.

The sandpipers breed in sub- and mid-arctic areas of Canada and Alaska. They begin their northward migration from South America in early to mid-May each year. The birds follow routes up the eastern coast or centre of North America, stopping only for short periods at such staging areas as Delaware Bay, New Jersey; Cheyenne Bottoms, Kansas; and Quill Lakes, Saskatchewan. Some juveniles do not migrate north in the spring or attempt to breed until their second year. However, replacement of the outer primaries, or outer wing feathers, may enable those that do attempt to breed in their first year to reach the breeding grounds successfully. Little food is available on the eastern coast of Canada in the spring, so this area is important only during fall migration. Migration northwards is relatively rapid.

The migration south begins in early July, when failed breeders and nonbreeders start out, followed quickly by adult females and then males that have left their young. Peak migration of adult Semipalmated Sandpipers in populated areas of Canada occurs around the end of July or beginning of August. Juveniles peak several weeks later; some travel with late adult migrants, but many apparently find their way to the wintering areas by instinct.

Most Semipalmated Sandpipers from the western Arctic migrate south through the interior of North America and stop over in such areas as Quill Lakes, Saskatchewan, and Cheyenne Bottoms, Kansas. Many of those that nested in the central or eastern Arctic stage in southern James Bay, the St. Lawrence estuary, and the Bay of Fundy in Canada, as well as on the northeastern coast of the United States. Instead of following the eastern coast of North America, most birds fly nonstop to South America over the Atlantic, a distance of more than 3 000 km.

The staging areas provide food that enables the birds to accumulate fat to fuel their long flights. For example, in the Bay of Fundy, the most important staging site in eastern North America, sandpipers may double their weight in less than two weeks by eating small shrimp-like invertebrates called Corophium, which are extremely abundant in the mudflats there. Some birds become so heavy that it is difficult for them to take off for flight!

Upon arrival at the non-breeding area, many birds are very lean, and juveniles often have no fat remaining at all. Many juveniles may not survive their first migration because of predators, such as Peregrine Falcons, inadequate stored energy for nonstop transoceanic flights, or storms. Feeding in the coastal mangrove swamps and other wetlands of the non-breeding area restores the successful migrants’ energy reserves.

Males usually arrive on the arctic breeding grounds in late May, a few days before females. Each male attempts to obtain a territory—often the same one as in previous years—and to attract a female by flight displays, hovering in the air while uttering sharp cries. Some pairs breed together for three or four years, although they apparently do not spend the winter months together. It is uncommon for both birds to return but find different mates. Like most small sandpipers in Canada, Semipalmated Sandpipers are monogamous, each bird having only one mate at a time.

Once the pair is formed on the breeding grounds, the male makes small depressions, or scrapes, in the ground. The female chooses one of the scrapes and lays eggs in it when she has obtained enough food to produce them. Most birds lay their eggs in mid- to late June, very few as late as early July.

The female almost always lays four eggs, usually one per day. These eggs are very large, together weighing almost as much as the female. They are "pyriform" in shape, or quite pointed at the small end. This allows them to fit together tightly in the nest cup, which keeps the eggs warm longer, an important factor in an arctic environment. The eggs are well camouflaged, being speckled and splashed with dark brown and olive colours against a light green or brown background.

Once the clutch, or set of eggs, is complete, the parent birds share the task of incubating, or keeping the eggs warm until they hatch. This takes about 19 days. Many eggs are lost to predators, such as gulls, hawks, and foxes. Semipalmated Sandpipers are too small and defenceless to attack predators and instead rely on distraction displays to decoy them away from the nest area. Egg predation is higher in years when mice and voles are rare (every three or four years in the Arctic), because predators that normally exist on small rodents switch to other prey, such as shorebird eggs and young.

Weather may also be a problem for breeding Semipalmated Sandpipers. If the insects and tiny water animals that they feed upon are unavailable because of high water levels or extremely low temperatures, incubating birds may be forced to desert their nests to survive. In some years, many females are unable to lay eggs at all, probably because they cannot obtain enough food.

Because the eggs are not incubated until the clutch is completed, all four young normally hatch within 24 hours of one another. Chicks are extremely independent right from birth. They are born with open eyes and almost adult-sized legs. As soon as they are dry, they begin to stumble about, pecking for insects. Chicks are not fed by their parents at all but are periodically brooded, or kept warm by a parent, during their first week. They begin to fly weakly at about 14 days of age and can fly fairly well at about 18 days.

Females normally desert their broods within 10 days after they hatch, leaving them to the care of the male. The later in the year the nest hatches, the earlier the female leaves. This is thought to result in a higher survival of females, which may still be stressed from egg laying. Males usually desert the chicks at about the time the chicks fledge, or take their first flight.

Many shorebird populations are particularly vulnerable to human interference, because they concentrate in great numbers in a few locations along migratory pathways and on the wintering grounds. In the late 1800s, when shorebirds were not protected by law from hunters, Semipalmated Sandpipers—although not as attractive to hunters as larger shorebirds—were considered good eating, and dozens could be killed with a single shot. After the Migratory Birds Convention between Canada and the United States was signed in 1916 to protect migratory birds, numbers of Semipalmated Sandpipers and other shorebirds increased.

Unfortunately, increasing human encroachment on coastal and interior wetland areas—the habitats used by migrating Semipalmated Sandpipers—has put their populations in danger once again. Although these areas are among the most productive environments in the world, providing great natural and economic benefits to humans as well as to wildlife, over a third of all wetlands present in the United States and southern Canada 300 years ago have been destroyed, and there is continuing pressure on the remainder from construction, commerce, agriculture, power projects, pollution, and recreation.

Because each major site along a migratory pathway is necessary for the survival of these birds, all important areas must be preserved if conservation is to be successful. International cooperation is thus essential for the future success of shorebird conservation.

A Western Hemisphere Shorebird Reserve Network (WHSRN) has been established for the preservation of critical areas for shorebirds in North, Central, and South America. The most important locations, or Hemispheric Sites, identified by the WHSRN organization, support over 500 000 shorebirds during the course of a year, or more than 30 percent of the flyway population of a species. Several areas that are extremely important to Semipalmated Sandpipers have already been dedicated as Hemispheric Sites: Mary’s Point, New Brunswick, and the Minas Basin, Nova Scotia (Bay of Fundy fall staging areas); Suriname (non-breeding season area); Delaware Bay (spring staging area); and Cheyenne Bottoms (spring and fall staging area). Ongoing research by the Canadian Wildlife Service and other organizations will help in the identification and protection of further key areas for Semipalmated Sandpipers and other species of shorebirds.

Most information on the life history of the Semipalmated Sandpiper has been obtained through banding studies, or tracking birds by placing numbered aluminum bands around their legs. This information is needed to learn more about such topics as migration routes, return to previous breeding areas, remating, sex-related differences in behaviour, and numbers of birds using a staging area over the year.

Semipalmated Sandpipers that have been captured in mist nests, rocket or flip nets, or walk-in traps that are marked with numbered metal bands, coloured leg bands, leg "flags" (plastic bands that project slightly from the leg), or colour dyes. Colour bands and dyes allow the observer to identify the site where the bird was banded originally, and sometimes even the individual, without recapturing the bird. Because there are many more bird watchers than bird banders, one can obtain much more information with such a marking scheme than with a metal band alone.

The Canadian Wildlife Service has carried out numerous successful banding projects on shorebirds. Some of the largest (in terms of numbers of Semipalmated Sandpipers captured) have been conducted on migrants at North Point in southern James Bay; Dorchester Cape in the Bay of Fundy, New Brunswick; and Quill Lakes, Saskatchewan. Banding studies conducted by researchers in Canada and elsewhere provide the information necessary for the protection of these birds and their habitats.

All About Birds, Semipalmated Sandpiper